Please take a few minutes to check out all of my sites.
http://www.desertheatradio.com - No ads - music 24/7 - live dj's that will rock your world!!!
http://www.thebdsmchat.com (don't let the name scare you away - we talk about everything there - come on in make yourself at home!!!)
http://www.ravenskyes.com
http://www.scammersexposedbydjcatlady.com

Severe acute respiratory syndrome coronavirus 2 (SARS–CoV–2) has led to the coronavirus disease 2019 (COVID–19) pandemic, severely affecting public health and the global economy. Adaptive immunity plays a crucial role in fighting against SARS–CoV–2 infection and directly influences the clinical outcomes of patients. Clinical studies have indicated that patients with severe COVID–19 exhibit delayed and weak adaptive immune responses; however, the mechanism by which SARS–CoV–2 impedes adaptive immunity remains unclear. Here, by using an in vitro cell line, we report that the SARS–CoV–2 spike protein significantly inhibits DNA damage repair, which is required for effective V(D)J recombination in adaptive immunity. Mechanistically, we found that the spike protein localizes in the nucleus and inhibits DNA damage repair by impeding key DNA repair protein BRCA1 and 53BP1 recruitment to the damage site. Our findings reveal a potential molecular mechanism by which the spike protein might impede adaptive immunity and underscore the potential side effects of full-length spike-based vaccines.
Keywords: SARS–CoV–2; spike; DNA damage repair; V(D)J recombination; vaccine

pHPRT–DRGFP and pCBASceI were kindly gifted by Maria Jasin (Addgene plasmids #26476 and #26477) [15]. pimEJ5GFP was a gift from Jeremy Stark (Addgene plasmid #44026) [16]. The NSP1, NSP9, NSP13, NSP14, NSP16, spike, and nucleocapsid proteins were first synthesized with codon optimization and then cloned into a mammalian expression vector pUC57 with a C–terminal 6xHis tag. A 12–spacer RSS–GFP inverted complementary sequence–a 23–spacer RSS was synthesized for the V(D)J reporter vector. Then, the sequence was cloned into the pBabe–IRES–mRFP vector to generate the pBabe–12RSS–GFPi–23RSS–IRES–mRFP reporter vector. 12–spacer RSS sequence: 5′–CACAGTGCTACAGACTGGAACAAAAACC–3′. 23–spacer RSS sequence: 5′–CACAGTGGTAGTACTCCACTGTCTGGCTGTACAAAAACC–3′. RAG1 and RAG2 expression constructs were generously gifted by Martin Gellert (Addgene plasmid #13328 and #13329) [17].

Cells were treated with different DNA damage reagents and then harvested at the indicated time points for analysis. Cells (1 × 105 cells/mL in cold phosphate-buffered saline [PBS]) were resuspended in 1% low–melting agarose at 40 °C at a ratio of 1:3 vol/vol and pipetted onto a CometSlide. Slides were then immersed in prechilled lysis buffer (1.2 M NaCl, 100 mM EDTA, 0.1% sodium lauryl sarcosinate, 0.26 M NaOH pH > 13) for overnight (18–20 h) lysis at 4 °C in the dark. Slides were then carefully removed and submerged in rinse buffer (0.03 M NaOH and 2 mM EDTA, pH > 12) at room temperature (RT) for 20 min in the dark. This washing step was repeated twice. The slides were transferred to a horizontal electrophoresis chamber containing rinse buffer and separated for 25 min at a voltage of 0.6 V/cm. Finally, the slides were washed with distilled water, stained with 10 μg/mL propidium iodide, and analyzed by fluorescence microscopy. Twenty fields with approximately 100 cells in each sample were evaluated and quantified using the Fiji software to determine the tail length (tail moment).

Cells were seeded on glass coverslips in a 12–well plate and transfected with the indicated plasmid for 24 h. Then, the cells were treated with or without DNA damage reagents according to the experimental setup. The cells were fixed in 4% paraformaldehyde (PFA) in PBS for 20 min at RT and then permeabilized in 0.5% Triton X–100 for 10 min. Slides were blocked in 5% normal goat serum (NGS) and incubated with primary antibodies diluted in 1% NGS overnight at 4 °C. Samples were then incubated with the indicated secondary antibodies labeled with Alexa Fluor 488 or 555 (Invitrogen) diluted in 1% NGS at RT for 1 h. Thereafter, they were stained with DAPI for 15 min at RT. Coverslips were mounted using Dako Fluorescence Mounting Medium (Agilent) and imaged using a Nikon confocal microscope (Eclipse C1 Plus). All scoring was performed under blinded conditions.

Briefly, V(D)J reporter plasmid contains inverted-GFP and IRES driving continuously expressed RFP. Continuously expressed RFP is the internal transfection control. After Recombination activation gene1/2 (RAG1/2) co–transfected into the cells, RAG1/2 will cut the RSS and mediated induction of DSBs, if V(D)J recombination occurs, the inverted GFPs are ligated in positive order by NHEJ repair. Then the cell will express functional GFP. So, the GFP and RFP double positive cells are the readout of the V(D)J reporter assay [18]. 293T cells at 70% confluency were transfected with the V(D)J GFP reporter alone (background) or in combination with RAG1 and RAG2 expression constructs, at a ratio of 1 µg V(D)J GFP reporter: 0.5 µg RAG1: 0.5 µg RAG2. The following day, the medium was changed, and after an additional 48 h, cells were harvested and analyzed by flow cytometry for GFP and RFP expression.

DNA damage repair occurs mainly in the nucleus to ensure genome stability. Although SARS–CoV–2 proteins are synthesized in the cytosol [1], some viral proteins are also detectable in the nucleus, including Nsp1, Nsp5, Nsp9, Nsp13, Nsp14, and Nsp16 [19]. We investigated whether these nuclear-localized SARS–CoV–2 proteins affect the host cell DNA damage repair system. For this, we constructed these viral protein expression plasmids together with spike and nucleoprotein expression plasmids, which are generally considered cytosol–localized proteins. We confirmed their expression and localization by immunoblotting and immunofluorescence (Figure 1A and Figure S1A). Our results were consistent with those from previous studies [19]; Nsp1, Nsp5, Nsp9, Nsp13, Nsp14, and Nsp16 proteins are indeed localized in the nucleus, and nucleoproteins are mainly localized in the cytosol. Surprisingly, we found the abundance of the spike protein in the nucleus (Figure 1A). NHEJ repair and homologous recombination (HR) repair are two major DNA repair pathways that not only continuously monitor and ensure genome integrity but are also vital for adaptive immune cell functions [9]. To evaluate whether these viral proteins impede the DSB repair pathway, we examined the repair of a site-specific DSB induced by the I–SceI endonuclease using the direct repeat–green fluorescence protein (DR–GFP) and the total-NHEJ-GFP (EJ5–GFP) reporter systems for HR and NHEJ, respectively [15,16]. Overexpression of Nsp1, Nsp5, Nsp13, Nsp14, and spike proteins diminished the efficiencies of both HR and NHEJ repair (Figure 1B–E and Figure S2A,B). Moreover, we also found that Nsp1, Nsp5, Nsp13, and Nsp14 overexpression dramatically suppressed proliferation compared with other studied proteins (Figure S3A,B). Therefore, the inhibitory effect of Nsp1, Nsp5, Nsp13, and Nsp14 on DNA damage repair may be due to secondary effects, such as growth arrest and cell death. Interestingly, overexpressed spike protein did not affect cell morphology or proliferation but significantly suppressed both HR and NHEJ repair (Figure 1B–E, Figures S2A,B and S3A,B). 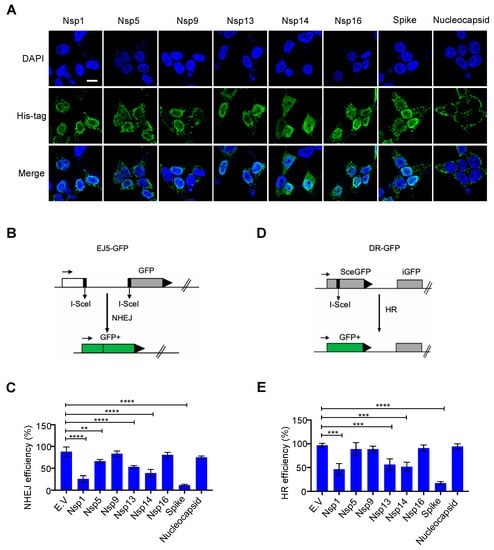 Because spike proteins are critical for mediating viral entry into host cells and are the focus of most vaccine strategies [20,21], we further investigated the role of spike proteins in DNA damage repair and its associated V(D)J recombination. Spike proteins are usually thought to be synthesized on the rough endoplasmic reticulum (ER) [1]. After posttranslational modifications such as glycosylation, spike proteins traffic via the cellular membrane apparatus together with other viral proteins to form the mature virion [1]. Spike protein contains two major subunits, S1 and S2, as well as several functional domains or repeats [22] (Figure 2A). In the native state, spike proteins exist as inactive full–length proteins. During viral infection, host cell proteases such as furin protease activate the S protein by cleaving it into S1 and S2 subunits, which is necessary for viral entry into the target cell [23]. We further explored different subunits of the spike protein to elucidate the functional features required for DNA repair inhibition. Only the full–length spike protein strongly inhibited both NHEJ and HR repair (Figure 2B–E and Figure S4A,B). Next, we sought to determine whether the spike protein directly contributes to genomic instability by inhibiting DSB repair. We monitored the levels of DSBs using comet assays. Following different DNA damage treatments, such as γ–irradiation, doxorubicin treatment, and H2O2 treatment, there is less repair in the presence of the spike protein (Figure 2F,G). Together, these data demonstrate that the spike protein directly affects DNA repair in the nucleus. 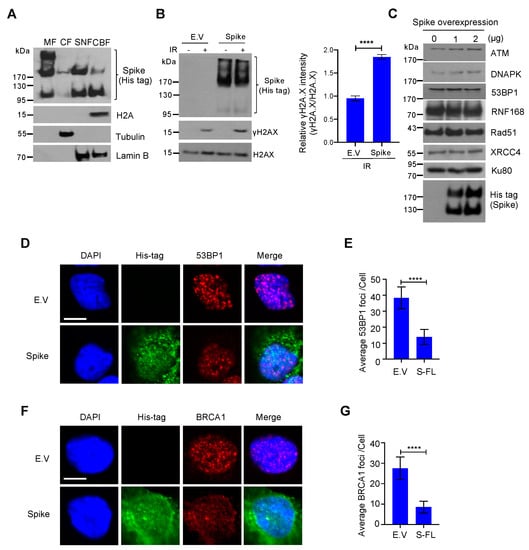 Our findings provide evidence of the spike protein hijacking the DNA damage repair machinery and adaptive immune machinery in vitro. We propose a potential mechanism by which spike proteins may impair adaptive immunity by inhibiting DNA damage repair. Although no evidence has been published that SARS–CoV–2 can infect thymocytes or bone marrow lymphoid cells, our in vitro V(D)J reporter assay shows that the spike protein intensely impeded V(D)J recombination. Consistent with our results, clinical observations also show that the risk of severe illness or death with COVID–19 increases with age, especially older adults who are at the highest risk [22]. This may be because SARS–CoV–2 spike proteins can weaken the DNA repair system of older people and consequently impede V(D)J recombination and adaptive immunity. In contrast, our data provide valuable details on the involvement of spike protein subunits in DNA damage repair, indicating that full–length spike–based vaccines may inhibit the recombination of V(D)J in B cells, which is also consistent with a recent study that a full–length spike–based vaccine induced lower antibody titers compared to the RBD–based vaccine [28]. This suggests that the use of antigenic epitopes of the spike as a SARS–CoV–2 vaccine might be safer and more efficacious than the full–length spike. Taken together, we identified one of the potentially important mechanisms of SARS–CoV–2 suppression of the host adaptive immune machinery. Furthermore, our findings also imply a potential side effect of the full–length spike–based vaccine. This work will improve the understanding of COVID–19 pathogenesis and provide new strategies for designing more efficient and safer vaccines.

H.J. conceived and designed the study. H.J. and Y.-F.M. supervised the study, performed experiments, and interpreted the data. Writing—original draft preparation, H.J.; Writing—review and editing, H.J. and Y.-F.M.; funding acquisition, Y.-F.M. All authors have read and agreed to the published version of the manuscript.

Not applicable, because of this study not involving humans or animals.

Not applicable, because of this study not involving humans.

The data presented in this study are available in the main text and Supplementary Materials.

The authors have declared that no competing interests exist. The funders had no role in study design, data collection and analysis, decision to publish, or preparation of the manuscript.

© 2021 by the authors. Licensee MDPI, Basel, Switzerland. This article is an open access article distributed under the terms and conditions of the Creative Commons Attribution (CC BY) license (https://creativecommons.org/licenses/by/4.0/).
Posted by Evelyn Turner at 9:34 AM

Your message has been sent to the moderator for approval and shall appear very soon!

All About the Author